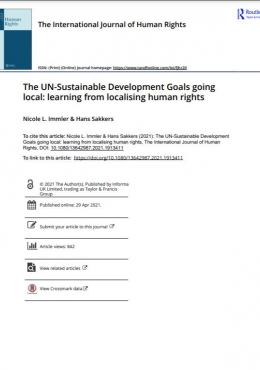 In 2015 the United Nations declared an ambitious programme, the Sustainable Development Goals (SDGs). With similar aspirations to the Universal Declaration of Human Rights in 1948, the SDGs claim is to make a difference in terms of justice and sustainability on a global scale. Both UN frameworks speak to the global imagination, but what do they do in (local) practice(s)? Are the SDGs going to be enough? While current research focuses on the governance aspect of the SDGs and the efficiency of their implementation by national governments, little attention has been paid to the localisation process. Exploring the SDGs as a social imaginary of a moral order (Charles Taylor) and linking this to a framework of ‘localizing human rights’, we determine whether and in what way the SDGs might be a source of inspiration in some pioneering city-initiatives.
Category:
Other Publications
Files: