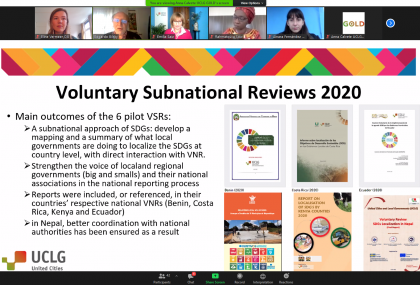 On 12 March 2021 the first of three UCLG-CIB workshops on the elaboration of Voluntary Subnational Reviews (VSRs) on the SDGs took place. The goal of the workshop was to foster exchange between local government associations of knowledge, ideas, best practices and questions that will lead to enriching the conceptualization and putting into practice the VSR work plan in the different countries.

The workshop was attended by in total around 30 representatives, mostly from the local government associations of Cape Verde, Germany, Indonesia, Mexico, Norway, Sweden, Tunisia and Zimbabwe, all from countries preparing Voluntary National Reviews (VNRs) to be presented at the HLPF in July 2021. The ambition is to have the VSRs connected as much as possible to the VNRs, to give voice to the efforts of local governments in achieving the SDGs, and to use the opportunity to voice the challenges and opportunities local governments face in this.

The workshop resulted in a rich exchange on the use of indicators for the preparation of VSRs, in which two different ambitions can be discerned: 1) indicators to measure to what extent local governments are achieving the SDGs and 2) indicators measuring to what extents are localizing and involved in achieving the SDGs. For the latter, a comparative study on this by UCLG might be used as an inspiration for such indicators. For the former, many indicator examples from amongst others Norway, Germany and Sweden were shared as an inspiration for other participants. The presentations given by all eight local government associations, their work plans and other documents shared will be distributed between these eight associations to further support exchange and peer learning.

The workshop was also attended by representatives from the local government associations from Pakistan, Belgium, Canada, and the Netherlands, which will not be preparing a VNR this year but are interested in following the process. Also present were representatives from UCLG Africa, FLACMA and from Jordan, as well as DeLog and Partners for Review (GIZ). The workshop was moderated by the UCLG-CIB Working Group Secretariat and the UCLG World Secretariat.

The next workshop will take place in April 2021 and will go into the dissemination and use of findings of the VSRs. The final versions of the VSRs will be submitted in June 2021. As a result of the UCLG-CIB trajectory of VSR workshops, guidelines for the development of Voluntary Subnational Reviews by local government associations will be developed on the basis of the local governments’ experiences of this year.