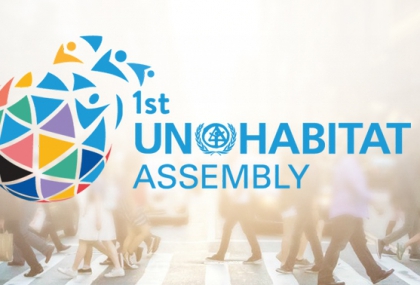 From 25-31 May 2019 the first session of the UN-Habitat Assembly took place at the UN-Habitat headquarters in Nairobi. Theme of the meeting was "Innovation for Better Quality of Life in Cities and Communities: Accelerated implementation of the New Urban Agenda towards achievement of the Sustainable Development Goals”. The Assembly meeting replaces the former UN-Habitat Governing Council.

UN leadership emphasises important role of local and regional governments
A Local and Regional Governments Forum took place as part of the official agenda, with contributions from members of the Global Taskforce of Local and Regional Governments, representin all regions of the world. UN-Habitat President Martha Delgado Peralta stressed the importance of local governments’ leadership for effective decision making and cautioned against corruption, ensuring that private sector engagement is based on sound regulatory policies. Furthermore, UN-Habitat Executive Director Maimunah Mohd Sharif emphasised that the voices of Mayors and local and regional governments are key to implement both Agenda 2030 and the New Urban Agenda. She also mentioned that both global agendas have major implications for the day-to-day operations of local governments, from fighting poverty, ensuring inclusive urban planning, and protecting the environment, to running reliable, affordable and effective basic urban services. She mentioned that UN-Habitat and the UN System need to hear the voices and recommendations of local and regional governments to implement the global agendas. Sharif hopes that this first Local and Regional Government Forum produced innovative ideas about how to bring the New Urban Agenda and Agenda 2030 together, working in synergy for sustainable cities in a more sustainable planet.

Outcomes: constitution of a first UN-Habitat Exeuctive Board and Strategic Plan 2020-2023
The main outcomes of the Assembly are the constitution of the first UN-Habitat Executive Board composed of 36 countries, tasked with policy oversight in between Assemblies. The new UN-Habitat Strategic Plan 2020-2023 was adopted and four resolutions were agreed, particularly on gender equality, safer cities and capacity-building. These documents can be found here.

Ministerial declaration highlights importance of cities and local actors
The Assembly concluded its deliberations adopting a Ministerial Declaration which highlights the importance of cities and local actors for effective climate change mitigation and acknowledges the need to promote local financing instruments for urban sustainable development. It also underlines the need to address urban development challenges in cities of all sizes taking into consideration the specificities of small and middle-sized cities and human settlements.