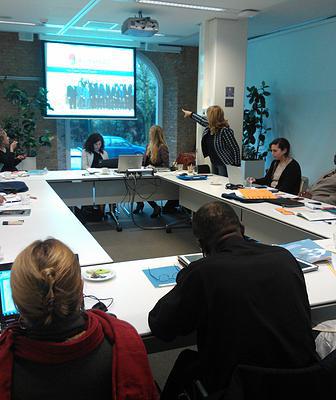 A two-day training at the headoffice of VNG International in The Hague signalled the start of the advocacy efforts to be undertaken by the UCLG Champions. It proved to be an inspirational couple of days for both trainers and trainees.
​
The training was organised on 16 and 17 January by UCLG and the CIB Working Group to prepare the elected local government officals that were selected as Champions for their task of advocating local government development cooperation. Unfortunately, not all Champions were able to attend. However, those who did, made their time count.

The goal of the Champions is to promote the messages from the UCLG Policy Paper on Development Cooperation and Local Government. This paper stresses the importance of getting local governments more involved in development cooperation. Being all elected local government officials themselves, these Champions are the best ambassadors for this cause.

The training was focussed on helping the Champions to get their messages across. Storytelling is a fundamental part of that endeavour. By sharing their experiences with national governments, donors and other stakeholders, the Champions can illustrate and emphasize the importance of local governments as active development cooperation actors. Improving storytelling skills was therefore part of the training.

There are multiple stakeholders in development cooperation that need to be aware of the importance of including local governments more in policy making and execution. An important part of the training was therefore dedicated to sending the right message to the right stakeholder. A lively discussion on strategies emerged, with the Champions providing a lot of input by sharing their views on the matter and the problems they face when trying to get their voices heard.

The final part of the training was reserved for planning: what can the Champions do, when can they do it and what are the tools and methods to their disposal? Ambitious but realistic action plans were formed by the Champions, assisted by the trainers. Important upcoming meetings of international organisations were discussed to make sure the Champions know what's ahead of them. They left The Hague for their homes in high spirits, and accompanied by a toolkit to help them in their endeavours.

Publication UCLG Champions Training Report
The Capacity and Institution Building (CIB) Working Group of UCLG has published the report of the UCLG Champions training that took place on the 16th and 17th of January 2014 at the head office of VNG International, the International Cooperation Agency of the Association of Netherlands Municipalities (VNG), in The Hague, the Netherlands.

Follow us on Twitter to keep up on the work of the UCLG Champions, or look for #UCLGChampions!