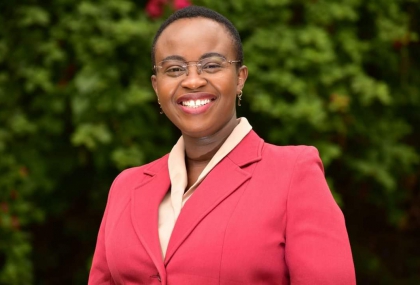 It´s important for all politicians to expand their network – for female politicians it´s even more important. This is the belief of Nereah Amondi Oketch, a Kenyan regional politician who participates in ICLD’s “Women’s Political Leadership Program”. She is one of the brightest stars among Kenya’s young female politicians, after her victory the other year in the TV show “Presidential election”. ICLD presented her in their series “Champions of local democracy”, – personal portraits of people who are playing a significant role in the development of local democracy where they live.

It was the non-profit organization ”Media Focus on Africa” that organized a reality show that for 26 weeks attracted 3.5 million viewers per week. The viewers’ task was to nominate the most suitable woman to become “Ms President of Kenya” – and they finally chose Nereah Amondi Oketch from Homa Bay on the eastern shore of Lake Victoria.

– I was so proud, she says when we talk from a hotel room in the provincial capital Kisumu. Just imagine that so many believed in me as a leader!

They were 500 competitors from the beginning and when eventually five were left at the end the competition was fierce: they were grilled in matters of government and diplomacy and they participated in a “presidential election debate” in front of millions of viewers. Nereah Amondi Oketch was pregnant with her fifth child during the “election campaign”, something she turned to her advantage:

– I wanted to show that pregnant women are competent and strong and able to get things done. I said it was me who was campaigning, not my pregnancy.

In her real political life, in the provincial parliament, she represents the Liberal Party. Now she hopes that the victory in the show will also highlight her work in the region. Among other things, she runs projects aiming to reduce poverty and domestic violence and give greater influence to women in society. The presidential competition gave her new contacts and new networks that can support her in her work. Thanks to the support of her party leader Raila Odinga, she has also joined the Africa Liberal Network’s Women Leadership Program.

– I think it is extra important for women politicians to acquire large networks in different parts of society. Women in positions of power are still the exception, we must struggle to gain influence. Men get it more naturally.

Her participation in ICLD’s leadership program will, she hopes, lead to a larger international network. She is one of about 20 female politicians from primarily other countries in Africa and from Eastern Europe. They have had an initial digital meeting and this autumn the hope is that they can meet in Sweden.

What more do you hope to get out of ICLD’s leadership program?
– I would like to receive feedback on the work I do here in Kenya. I would like to hear about their ideas on how to get more women involved in politics.

What support do you get today from other female politicians in Kenya?
– Not much! The competition is fierce, even within our own party. I would like to see us cooperate more. I actually get more support from male politicians!

Her strategy is to be a slightly different politician than most of the competitors.

– Politicians in Kenya are often far from the citizens. I do not want to be such a politician, I want to be out among people much more, I want them to be able to reach me, to talk to me.

Earlier this year, she arranged an outdoor meeting to draw attention to the mental illness that has increased in the wake of the pandemic. Nereah Amondi Oketch says that she often visits women at their workplaces and in their homes. It has even happened that she has stayed over night.

The greatest obstacles for women entering politics
– Many people still think that a woman has nothing to do in politics, that it is morally reprehensible, that she should stay in the house. Many still believe that a woman should be controlled by her husband, her family or even her clan, says Nereah.

Her parents’ marriage ended when her father couldn´t accept that her mother had a professional career.  Her own husband has been a huge support, both when she trained as a public accountant and when she entered politics.

– He has taken care of our children in a way that is unusual among men in Kenya.

But her parents-in-law were sceptical at first when they noticed her ambitions.

– They told my husband to make me pregnant, because then I would stay in the house. But that tactic did not work so well, she says and laughs.

One of her own role models was the region’s first elected female politician, a woman who gave her important advice on how to combine life as a mother of young children and as a politician:

– Your children will be disappointed when you are away night after night, she said. Therefore, it is important to make them understand as early as possible why you do what you do.  And let them be part of it.

For Nereah Amondi Oketch it turned out well, her two adult daughters have been active in her political campaigns.

– They have understood how important my work is, they want to be involved and strive for the same goals as me.

The daughters will also be involved in working for her next major political goal: a seat in the national parliament in the 2022 election.

About Champion of local democracy
Gender or status does not matter, the important thing is that the people we are looking for have democratic values to inspire others. They may have gone through difficult situations, but never backed away from the front line of democracy. They have been or are still part of ICLD’s business and all have a personal story to tell the world.