How to jointly tackle global challenges: an international 'rencontres' in Paris 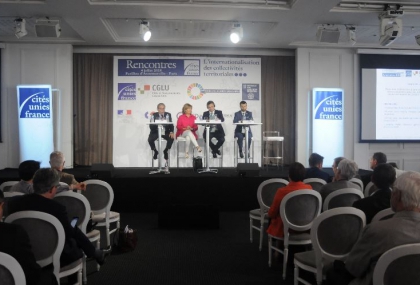 Last July, 400 peoplegathered in Paris, to discuss various challenges that towns and regions are facing. The occassion was a conference organized by Cités Unies France (CUF), on the internationalization of towns and regions. While a large part of the representatives were French local government representatives, different delegations from partner countries, as well as embassy officials attended as well..

From urbanisation to climate to youth
The plenary talks focused on questions varying from “Facing the increasing urbanisation issues, what role can the local governments play?" to "What is our vision of the world for 2030? What is our local approach to Sustainable Development Goals (SDGs)?” Three workshops were organised on the themes of Climate, Migration and Youth. Micro-workshops were held in parallel, allowing participants to promote their initiatives, projects and innovative approaches, such as CONNECT, the European Days of Local Solidarity (EDLS), the PLATFORMAwards or the Covenant of Mayors in Sub-Saharan Africa. It was an opportunity to listen and share experiences. The event was organized in partnership with PLATFORMA. The implementation of the Sustainable Development Goals (SDGs) by various actors (local authorities, companies, researchers, academics, representatives of civil society) was central to debates throughout the day.

Latin-America side event
The second day consisted of a seminar named "Europe – Latin America “Crossed perspectives – towards sustainable international action”, organised at the City of Paris by Cités Unies France, AL-LAs network, Mercociudades and PLATFORMA. During this entire day, the relations with Latin America stood central.

Next year, Cités Unies France is organizing the tenth edition of the Meetings.