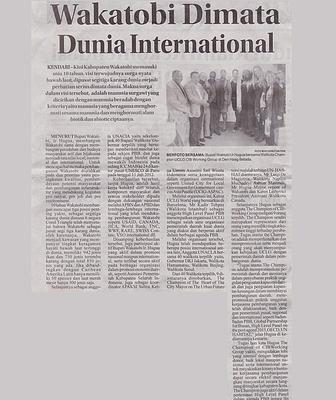 The Champions have informed their respective local communities about their involvement in the UCLG Champions training on Development Cooperation, which took place on 16 and 17 January in The Hague, the Netherlands.

The website of the municipality of Baganté in Cameroon posted a report on the attandence of Mayor Célestine Ketcha Epse Courtès. The news item writes about the selection of the Mayor as regional Champion, the goals of the Champions and the content of the training.

The Southern African Housing Foundation (SAHF) mentioned  the involvement of Emalahleni Local Municipality Mayor in the UCLG Champions training on Development Cooperation in their newspaper of last February. Read here their newspaper.

The news of the Champions training in The Hague also reached the islands of Sulawesi, Indonesia. Two regional newspapers from Wakatobi reported on Mayor Hugua's participation in the training.

These reports help to communicate back to the communities of the Champions and inform the citizens what their elected local government officials are doing to get the voices of local communities heard on the international level.