The bicycles of decentralised cooperation keep on rolling! Launch of learning paper with regional perspectives on DC 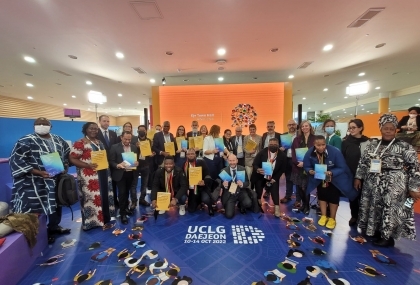 The summary report Localizing the SDGs: Regional Perspectives on Decentralized Cooperation was launched at 2022 UCLG World Congress in Daejeon, South Korea, on 12 October. This is another product related to UCLG-PLATFORMA Module 4.

This report was presented together with the new UCLG-CIB Policy Paper on Development Cooperation of Local Governments, during the session “Decentralized Cooperation: From Learning to Policy and vice-versa”.

It is not surprising that the critical role of decentralized cooperation in implementing and localizing the SDGs warrants serious attention. In this regard, the regional sections of United Cities and Local Governments (UCLG) have embarked on unique journeys supporting the local and regional governments to implement and localise the Global Agenda through decentralised cooperation over the years. These journeys have contributed significantly to the local governments and municipal movement. However, these actions typically remain largely undocumented and without reports, except for the European Section.

This summary document shares the key lessons learned from the practices and perspectives that came up during the rollout of UCLG Learning Module 4: Localizing the SDGs through Decentralized Cooperation. The implementation was possible through the partnerships between UCLG Learning, PLATFORMA, and most of UCLG’s Regional Sections that coordinated and facilitated learning  activities. Whilst all of them remained committed to the localisation of the Global Agenda 2030, the findings show that they are at different stages of rollout and preparedness, with each facing very unique regional challenges.

For instance, the Middle East and Western Asia (MEWA) region’s decentralised cooperation is in its infancy stage due to the relative regional instability related to wards, migratory movements, water and food security, etc. On the other hand, a contrasting approach was adopted in Europe, with a general higher number on municipalities and associations who have gone through capacity building activities and have strong, global decentralised cooperation initiatives which sometimes require a relatively small team which can ensure following up.

Additionally, the Latin American region is taking the lead in being active contributors of technical cooperation in South-South and some triangular horizontal partnerships. Whilst the African region is on this trajectory, it has not yet consolidated its institutional structures to support new roles, with capacity and finance remaining as severe constraining factors. Finally, the ASPAC region appears to have managed an efficient mobilization of regional capacity and are trailblazers in rolling out UCLG training programs.

The UCLG policy paper builds on these findings, highlighting new roles and opportunities for the development cooperation partnership in particular of the South South and triangular agenda. At the same time, it has been facing new challenges including climate change, re-centralisation, conflicts and reduction of resources. In the debate, several regional sections already adapt to this situation with regional initiatives such as the Moroccan Fund for decentralised cooperation or the Mercociudades South-South programme.

Find out more about these report on regional perspectives. The document is available in English, Spanish, and French. Additionally, the final versions of the Policy Papers can be found here in English, French, and Spanish.