UCLG discusses priorities for 2020 in Tangier 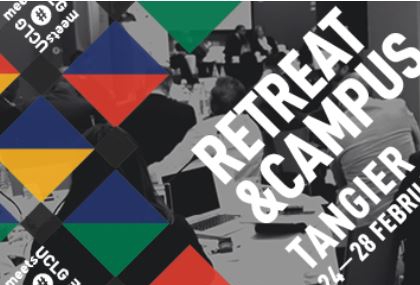 Last week the 6th edition of the UCLG retreat was held – a week-long gathering that provides an opportunity for the key notes of the organization and partners to define synergies and develop actions in line with the work plans set out by the governing bodies of UCLG. The annual retreat offered participants an opportunity to boost the connections among the different parts of the world organization, including the involvement of political leaders and the technical staff. The CIB secretariat participated the entire week and hereby informs you about some highlights, relevant to the CIB network.

CIB co-organized a session on SDG reporting, together with the UCLG research team. The meeting served to inform the participants about some of the important developments within this field. Not only is UCLG about to finalize its annual survey on the SDGs, for the annual HLPF report; the team is also working on the set-up of a Voluntary Local Reviews (VLR) community (with participation from large cities such as Buenos Aires, Barcelona and the New Taipei City government), in line with this trend in SDG reporting. The community of practice is aimed at facilitating the exchange of information regarding the different structures and contents of VLRs, the institutional arrangements, the process of development and the systems of indicators. It should also promote peer-to-peer learning and dissemination of methodologies and experiences.

Aside from this community, UCLG has also set up a working group on SDG indicators. UNDP, the Government of Andalucía, Diputació de Barcelona and Barcelona Metropolitan area lead this group, together with UCLG. CEMR, the German Association of Cities, UN Habitat, VVSG , the city of Durban, CNM, the European Commission, the University of Florence and Tap network are members too. within this working group, a through and in-depth study has been commissioned of the initiatives currently taking place globally and at all stages (local, national, international, by other stakeholders) on issues of reporting, indicators and data collection and analysis. This study will identify pros and cons, as well as strengths and weaknesses, of existing systems, in order to recommend alternative options, improvements and contributions for local and regional governments to take part in the reporting effort.

The CIB Working Group and the LGA Forum also organised a session on the role of associations of local governments (LGAs), within UCLG. The discussion starten with a presentation of the draft declaration on behalf of LGAs, which had been presented at the UCLG world congress in Durban last year. Members gave valuable feedback to the document and decided that the topic of the role of associations deserves a broader discussion. Following this meeting, the LGA forum will launch a process on "the future of associations" at the UCLG Executive Bureau in May in Rome.

And this is not even all! Do you want to learn more about all of this, or participate actively in the various mechanisms? Please get in touch through uclg.cib@vng.nl.

One of the highlights of the retreat was the first presentation of the “Local4ActionHubs” concept, by the UCLG team. UCLG plans to showcase various initiatives by local governments, under the heading of ‘Local4ActionHubs’. this should serve as certification and acknowledgement of things that the UCLG members are doing at local level; things they are proud of, which are important for localizing the global agendas. By placing them under one heading, this will contribute significantly to collective learning in the network. The concept will be rolled out in the months to come – stay tuned for more information.

2020 will mark the 75th birthday of the UN. The UN is launching a global conversation about its future and invites citizens and organizations to share their thoughts in an online survey, which can be accessed via the following link: https://un75.online/#s2. UCLG encouraged the membership to share their ideas, both in the survey and for a vision report on behalf of UCLG, to be shared with the UN later this year. CIB members are encouraged to become actively involved.