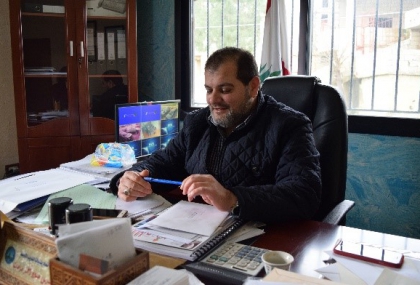 The Swedish Association of Local Authorities and Regions (SALAR) is implementing a Sida-funded project – Resilience in Local Governance: Reslog - in Turkey and Lebanon aiming at resilient and sustainable local governance systems in light of the Syria refugee crisis.

In Akkar governorate in northern Lebanon, SALAR is working in partnership with several Unions of Municipalities with a whole systems approach in the areas of institutional development, data collection, planning and delivery of basic services, community interaction, and transparency and accountability of local governments.

One challenge in Dreib El Awsat Union of Municipalities is the lack of demographic data. Not knowing how many children in the area that do not attend school, makes it difficult to know how many schools that are needed. Numbers are essential for identifying the needs of the community, says Abboud Merheb, Head of the Union. – “We need to know our weaknesses. Numbers will tell us what to do. If there are no numbers, then I don't know which problems I have to solve”.

-“Reslog is about deepening the local governance concept at the municipal level. We Lebanese talk a lot about this concept, but honestly no one is actually adopting it in Lebanon. So when we work with Reslog, we need to reflect a lot on how to deal with this situation. For example, in the inception phase, we focused on creating a framework that also our partners understand. You can’t just say ‘hey let’s work on local governance’, because it is a concept that most municipalities here don't know much about. I believe Reslog really can empower the unions of municipalities. We don’t come with a prepared project. We invite the unions to jointly with us do the institutional needs assessment where all contribute with inputs and identify the gaps that need to be addressed. We provide a learning space for them to get to know what institutional needs assessments and strategic plans are, and why it is important to have them. I really think that we are making a change”, says Corinne Sakr, National project manager for Reslog Lebanon.

-“SALAR does not bring a proposal from Sweden to implement or impose on Lebanon. Instead, they come here to listen. They even made a feasibility study before starting with the project framework! They have been flexible to write a proposal according to the real needs, and this is something I really believe in”, says Souraya Hammoud, Deputy project manager for Reslog Lebanon.

Miad Mohammad and his wife Rima live with their four children in El Bireh municipality, in Dreib El Awsat Union of Municipalities. The family gets 160 dollars per month in food assistance which barely suffices to pay for their two room-apartment that costs 135 dollars a month. The rest of their expenses they cover by building up debts in shops.

In ten years from now, they wish they will be back in Syria. – “Inshallah, we will have a house there, I will teach our kids. We will be safe and secure. We will have our basic needs fulfilled. Despite the war in Syria, life there is much better there than here in Lebanon”, says Rima and smiles.

But to go back is still not even on the horizon. – “No, not until the war is over, of course not. Idlib, where we come from, is the most insecure place with most clashes. There is nothing to discuss, we will wait for the war to end”, says Rima. – “But if we could, we would have gone back yesterday”, says Miad Mohammad.