Publication - Decentralised cooperation and the 2030 Agenda 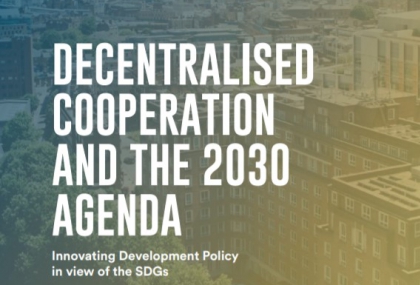 This research was commissioned by the Government of Catalunya, as a contribution to the Capacity and Institution Building (CIB) Working Group of United Cities and Local Governments (UCLG), to the research collective La Mundial (Ignacio Martínez and Pablo Martínez-Osés). The objective of the work was to grasp and systematize the main changes that decentralized cooperation policies are exploring to renew and redefine themselves in light of the SDGs. To do this, the study carried out an exhaustive analysis of the academic and institutional literature, establishing a framework that relates the origin and historical evolution of decentralized cooperation with the current context, where development challenges are ever more interdependent and transnational. The study also had an empirical dimension, aimed at identifying the visions and the state of changes already underway, as well as the potential to address them from decentralized cooperation. For this, a questionnaire was designed that was presented to and discussed with UCLG’s CIB working group, and disseminated among various associations of local and regional authorities, as well as by the “PLATFORMA” project. Its conclusions present the changes that decentralized cooperation should incorporate, giving continuity to the described evolution, in order to maximize its contribution to the new global development framework. These changes, which can already begin to be identified in the practices of decentralized agents –albeit incipient and uneven– are presented for five fundamental areas of public policy: norms, planning, dialogue with multiple actors, capacity building and instruments. The complete study can be found here http://www.cib-uclg.org/cib-library/content/decentralised-cooperation-and-2030-agenda.