Did we make progress on the SDGs since 2015? 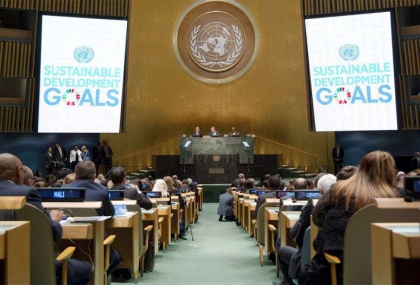 The fourth High-Level Political Forum on Sustainable Development (HLPF) takes place between 9 and 18 July. This is an annual meeting of the UN where progress on the Sustainable Development Goals (SDGs) is discussed. This year 47 countries report to the UN and the theme of the forum is “empowering people and ensuring inclusiveness and equality”. Focus is placed on SDG 4, 8, 10, 13, 16 and 17. This year is also an important year in terms of evaluation: where do we stand, 4 years after adoption? And how can we boost progress and document on this?

Visibility for the localization of the SDGs: the Local 2030 event
Local governments will again be well-represented in New York, through the delegation of the Global Taskforce of Local and Regional Goverments, of which United Cities and Local Governments is one of the members. UN DESA organizes a Local2030 event on July 16 and 17, which will focus on the following topics:

The Global Taskforce of Local and Regional Governments has drafted a programme which includes the Local 2030 event and all other relevant events for local and regional governments. You will find this programme atached to this article.

International attention to SDG progress
This year will also see the organisation of the SDG Summit in September, aside from the HLPF. This SDG Summit will be convened under the auspices of the UN General Assembly (UNGA) at the level of Heads of State and Government. It will take place in New York,  from 24-25 September 2019.

The political declaration to be adopted at the SDG Summit was circulated last week, with the title: “Gearing up for a decade of action and delivery for sustainable development”. The document has a three-part structure: